We are excited to announce a new feature to our Premium subscription, introduced on our Premium interface last week.  It turns out that most of you, once you have access to now over 2000 datasets in the AggData Premium library, you want to be able to download more than just a single list at a time.  Until now we have been putting together these "dumps" of data for you on a case by case basis, but now, you will be able to build and download these on your own.  The new feature is called "List Builders", which are basically templates to allow you to download large portions of our library quickly and easily.  Creating a List Builder is done in three simple steps: 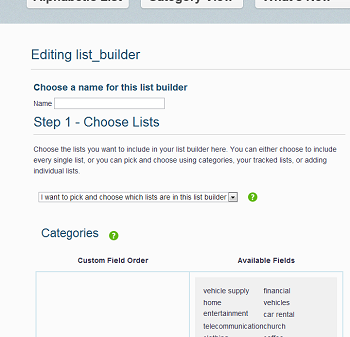 Once the List Builder has been defined, you can just Save it, or Save and Run, which starts putting together the list based on your definitions.  Depending on how much data ends up in the final list, and how many other list builders are being run (by you or other users), it could take anywhere from a few seconds to an hour before you data is ready.  Once ready, the data can be downloaded in a zipped CSV file, and the List Builder stays on your account, so you can come back later and rerun the builder with all updated data.

We are still working on some official documentation, but hopefully this gets you started.  Login, click on the "List Builders" button, and let us know what you think!

Are you buying more than one dataset?

Have you heard how AggData Premium can save you money?