Amazon is reportedly building new Amazon Fresh full-sized grocery stores that will utilize the Just-Walk-Out technology it has incorporated into its smaller Amazon Go stores. Planning documents are said to include a dozen entry and exit gates as well as ceiling-mounted racks to wire camera arrays, a setup that until now has only appeared in Amazon Go convenience stores. Amazon seems to have solved a significant technical challenge, creating a grab-and-go system that can handle scores of shoppers at once and cover large supermarkets without being prohibitively expensive to build and operate.

Meanwhile, Amazon is bringing its palm-scanning payment option to a Whole Foods location in Seattle, and the Company plans to add Amazon One as a payment option at seven additional Whole Foods stores in the Seattle area during the coming months. Initially introduced at two Seattle-area Amazon Go stores in September 2020, Amazon One is designed to let customers use their unique palm signature to pay, or present a loyalty card at a store. Amazon has been gradually adding Amazon One payment to a select number of its brick-and-mortar stores including Amazon Go, Amazon Go Grocery, Amazon Books and Amazon 4-star in and around Seattle.

Published reports say L Brands is in talks with potential buyers to sell Victoria’s Secret, approximately one year after a prior deal with Sycamore Partners was cancelled due to the pandemic. The Company is reportedly looking for more than double the $1.10 billion valuation of the prior deal. L Brands recently increased its 1Q21 earnings guidance, citing a stronger forecast for both Bath & Body Works and Victoria’s Secret. The lingerie brand could now seek a valuation of $2 billion – $3 billion, according to the reports.

Neiman Marcus plans to open 10 Fashionphile studios inside existing Neiman Marcus stores in Austin and San Antonio, TX; Atlanta, GA; Las Vegas, NV; Boca Raton, FL; King of Prussia, PA; Scottsdale, AZ; Canoga Park, CA; Troy, NY; and Northbrook, IL. The Company had purchased a minority stake in Fashionphile two years ago, and has since expanded with locations inside one store in Dallas, TX and four in California. Fashionphile is a pre-owned luxury handbag retailer based in California. Neiman Marcus sales stylists will be able to start the resale process online with their customers.

Albertsons’ 4Q20 comps and EBITDA increased 11.8% and 21.3%, respectively. FY20 comps grew nearly 17%, and EBITDA jumped nearly 60% to $4.5 billion. During 4Q20, the bottom line swung to a loss of $144.2 million, as the Company recorded a $607.2 million charge related to the withdrawal from a pension fund. The Company opened nine stores and remodeled 409 locations in FY20. There are also plans to maintain a significant chunk of its pandemic-related gains, as management expects FY21 comps to decline 6% to 7.5%, representing two-year stacked growth of 9.4% - 10.9%. FY21 EBITDA is expected to range between $3.5 billion – $3.6 billion, which represents growth of at least 23% from FY19. Albertsons expects to increase capital spending to a range of $1.9 billion - $2 billion, including for further remodels and digital investments. Digital sales grew more than 200% in each quarter of FY20, including 282% growth in 4Q; however, management admitted it digital business is “still behind some others.” Last week the Company also appointed Danielle Crop as its chief data officer. Ms. Crop most recently held the same position at American Express. Click here to request a list of future store openings and closings. 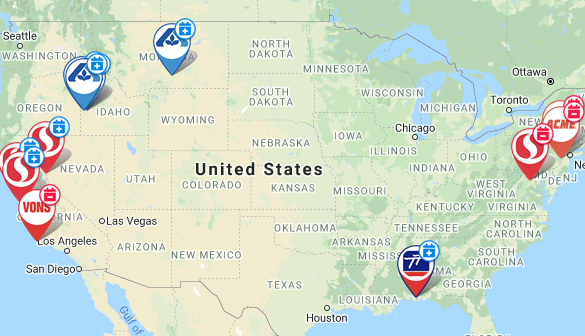 Gap plans to open its first two international Athleta activewear stores in Canada this fall, one in Toronto and the other in Vancouver. Athleta generated $1 billion in annual sales last year. The Company aims to have Old Navy and Athleta combined to make up about 70% of total sales by 2023, up from 55% in 2020. Part of its strategy to reach the $2.00 billion mark is to sell Athleta’s products at other retailers in the U.S., open more U.S. stores, and expand internationally. Click here to request a list of future store openings and closings. 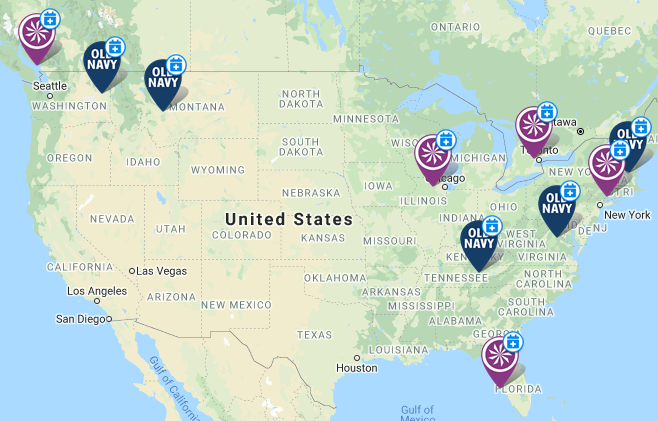 Natural Grocers by Vitamin Cottage plans to expand and relocate its Pueblo, CO location. The store will close on May 3 and reopen on May 6 at the same address (just across the parking lot). Click here to request a list of future openings.

In December 2020, it was reported that Save-A-Lot (SAL) sold 51 stores to Fresh Encounter as part of its transition to a wholesaler and sold most of its corporate stores to licensees. Reports now indicate two additional transactions for 28 stores were completed with existing SAL licensees. Leevers Supermarkets (owned by the Leevers family) has acquired 17 stores, including 14 in the Philadelphia area and three in New Jersey, while Save Philly Stores (owned by Shawn Rinnier) has acquired 11 stores, including seven in Pennsylvania, three in Delaware and one in Atlantic City, NJ. Prior to these transactions, Leevers operated 17 SAL stores in Denver, CO, and Save Philly Stores ran five SAL units in Philadelphia.

Together with other unannounced transactions, it is believed that 12 deals for 132 stores have been completed so far. That is up about 51 from when the Fresh Encounter transaction was announced in December. This leaves roughly 170 stores remaining to be re-licensed, which the Company expects to complete by the end of calendar 2021. The Company also still plans to retain 21 stores in its home St. Louis, MO market, for an estimated total store count north of 1,000. A spokesperson said the Company was partnering closely with licensees to refresh and remodel as many as 250 stores in 2021. The remodels would include insights from Save-A-Lot’s new prototype store, introduced in St. Louis in 2019. 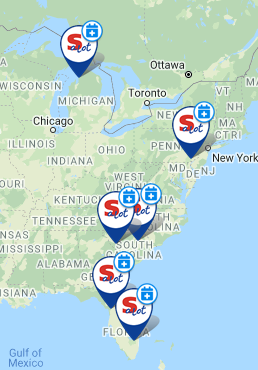 PCC Community Markets’ 2020 grocery sales increased 26.1% to $383.2 million, driven by the opening of two new stores in Bellevue and Seattle, WA, as well as increased pandemic-related spending driven by its members, with net income up 26.4% to $2.7 million (including one-time impacts from tax refunds). PCC said it gave back more than 60% of its profit to its community, including its first-ever member dividend totaling $3.9 million.

Overall, management-adjusted EBITDA jumped 39%, and EBITDA margin improved to 17%. During the period, the Company expanded its revolver from $450 million to $600 million. The balance sheet remained strong at quarter-end, with just $315 million in revolver debt and total debt to TTM EBITDA of under 1x. During the period, the Company opened 11 new stores and closed six locations, operating 607 locations as of April 3. Looking forward, management raised FY21 EPS outlook to at least $6.50, which is more than 40% above FY20. FY21 free cash flow is expected to be approximately $225 million. Click here to request a list of future store openings. 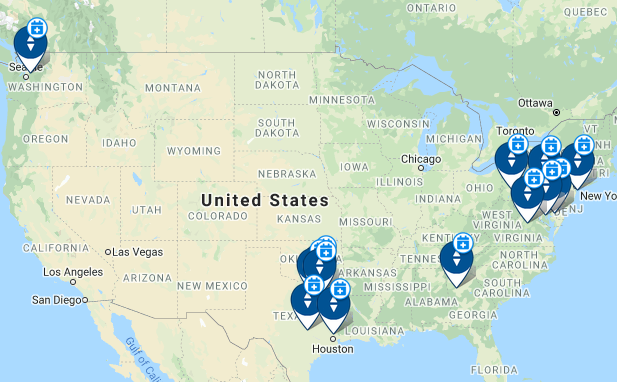 Nathan’s Famous has partnered with Ghost Kitchens Brands to open 100 non-traditional locations by the end of 2021. Sixty of the locations will be in the U.S., with many inside Walmart Stores, and 40 will be in Canada. Ghost Kitchen Brands will be selling Nathan’s new menu as well its recently launched Wings of New York virtual kitchen concept, with plans to grow up to 150 new locations by next year. Based in Canada, Ghost Brand Kitchens operates kitchens with multiple brands and offers pickup or delivery by third-party companies.

TravelCenters of America (TA) completed the sale of 42 standalone restaurant locations primarily branded as Quaker Steak & Lube for $5 million. TA acquired Quaker Steak & Lube in 2016. It has since led a brand refresh that includes a new Quaker Steak & Lube Express walk-up concept and the addition of a corporate chef. The Company announced the strategic divestment in February.

Fresh Acquisitions, LLC (operating as Old Country Buffet, Furr’s, et al.) filed a voluntary Chapter 11 petition in the U.S. Bankruptcy Court for the Northern District of Texas. The proceedings have been designated as case number 21-30721. Prior to the COVID-19 pandemic, the Debtors operated buffet-style restaurants, with approximately 90 restaurants in 27 states. The concepts include six buffet chains and a full-service steakhouse under the banners Furr’s Fresh Buffet, Old Country Buffet, Country Buffet, HomeTown Buffet, Ryan’s, Fire Mountain, and Tahoe Joe’s Famous Steakhouse, respectively. As of the petition date, the Debtors were party to leases on 71 restaurant locations. Before the commencements of the cases, the Debtors ceased operations in 57 locations and surrendered possession of the premises to the applicable landlords. In that regard, the Debtors filed a motion seeking to reject the 57 leases. Click here to request additional information.