Published reports indicate that Amazon Fresh has fully built at least seven grocery stores that are currently sitting unoccupied (dubbed “zombie stores”). Unopened stores are located in San Diego, CA, Eden Prairie, MN, Philadelphia, PA, Staten Island, NY, and New Jersey (three). The reports speculate that Amazon is waiting to open the stores because it anticipates a possible recession in 2023, and perhaps the Company will hold off until the economy improves. According to the reports, it is currently cheaper for the Company to keep the stores closed and pay rent and utilities than to pay a lease withdrawal fee or severance to newly hired employees. This calls into question the fate of another 26 locations currently under development. The Amazon Fresh banner was launched in September 2020, and until recently it was keeping up a pace of two openings per month. The chain has not opened a store since September 2022 and currently operates 44 units in the U.S. and 19 in the U.K. (U.S. stores shown in the map below). 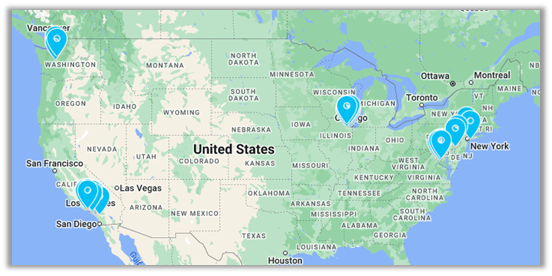 Alimentation Couche-Tard entered into an agreement to acquire all of the membership interests of True Blue Car Wash LLC, which operates express tunnel car wash sites under the Clean Freak brand in the Southwest and the Rainstorm brand in the Midwest. True Blue currently has 65 car washes in Arizona, Texas, Illinois, and Indiana, along with a network of sites planned or under development. Couche-Tard said it believes True Blue’s sites are a natural extension of its current car wash network of more than 2,500 locations. More than 85% of True Blue’s locations are within three miles of a Circle K location, which provides a strong geographic overlap. The transaction is expected to close in the 1H23, subject to standard regulatory approvals and closing conditions. It will be financed using Couche-Tard’s available cash and/or existing credit facilities.

Ames Department Stores was a discount department store chain that was founded in 1958 and at its peak operated 700 locations across 20 Northeastern, Midwestern, and Southeastern states. However, growth from acquisitions brought about heavy debt loads at a time when credit markets were tightening and competition, especially from Walmart, was surging. As a result, the Company closed its remaining 327 stores in 2002 and liquidated its business; private equity investor Oak Point Partners acquired the intellectual assets in 2012. The assets are now reportedly owned by Molyneux Group, which is based in the U.K.

Fast forward 20 years from its last store closure, an announcement on amesstores.com stated, “Ames Department Stores, Inc is returning in Spring 2023.” The statement was confirmed by Cross Moline Ventures President Shannon de Molyneux, who said that Ames will be opening seven stores in 2023, starting in Connecticut and moving into New York and Pennsylvania. Once those stores launch, Ames plans to open in Rhode Island in 2024 and implement an expansion plan for 2024-2025. Previously based in Rocky Hill, CT, the Company is reportedly considering Meriden, CT for its new corporate headquarters. Published reports say stores will offer much of the same products as the legacy Ames stores, but will also offer groceries.

According to Mastercard Spending Pulse, U.S. retail sales (excluding automotive) increased 7.6% YOY for the holiday period, November 1 through December 24. Online sales grew 10.6%, with ecommerce making up 21.6% of total retail sales, up from 20.9% in 2021 and 20.6% in 2020; in-store sales grew 6.8%. Black Friday remained the highest spending day of the period, with sales up 12%, followed by Saturdays in December. In-person dining at restaurants climbed 15.1%, apparel sales were up 4.5%, while jewelry sales fell 5.5% and electronic sales were down 5.4%.

A survey conducted by ICSC showed that 189 million consumers shopped on Super Saturday (December 17), of which 70% shopped in store; this exceeded the NRF’s prediction for more than 158 million consumers. The majority of shoppers sought holiday gifts, followed by spending on dining and entertainment. 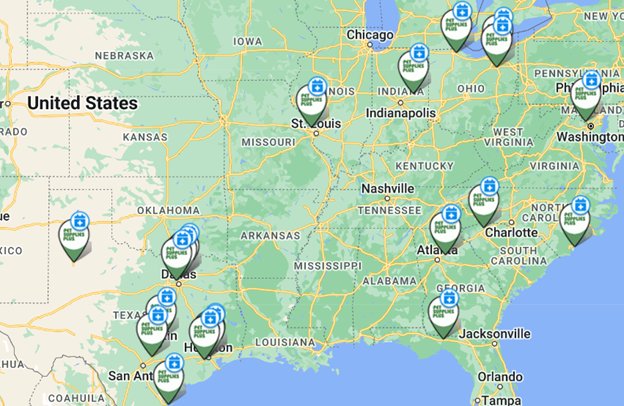 Victoria’s Secret completed the acquisition of Adore Me, Inc., a digitally-native intimates brand. The acquisition creates meaningful sales and profit upside opportunities for VS&Co, including the opportunity to leverage Adore Me’s expertise and technology to continue to improve the Victoria’s Secret and PINK customer shopping experience and accelerate the modernization of VS&Co’s digital platform. Adore Me will serve as a long-term growth vehicle for VS&Co, generating an estimated $250 million of profitable sales in FY22.

Albertsons said the State of Washington Supreme Court set a date of January 17, 2023 (previously set for February 9, 2023) for a review of the Washington State Attorney General’s appeal seeking to block the Company’s $4 billion dividend payment to shareholders. The Company also indicated that the U.S. Circuit Court for the District of Columbia denied a motion filed by the attorneys general of California, Illinois, and the District of Columbia seeking an injunction pending appeal against payment of the dividend. As previously reported, Albertsons announced the special dividend of $6.85 per share at the same time as its planned $24.60 billion merger with Kroger, which is scheduled to close in 2024. Washington State Attorney General Bob Ferguson sued on November 1, 2022 to halt the proposed dividend, arguing it would weaken the Company and violate antitrust law and the Consumer Protection Act. After a state superior court ruled that the dividend payment could go forward, Ferguson appealed to the state Supreme Court and requested an emergency extension of the temporary restraining order blocking the payment, which was granted.

Jack in the Box signed an agreement with Jeff Yablun and Frank Conley of Cedar Tree Restaurant Group for 37 new restaurants and 46 existing stores in four Southeast markets: Nashville, TN; Baton Rouge, LA; Greenville, SC; and Charlotte, NC. Of the 267 new franchise commitments that have been signed with Jack in the Box since mid-2021, the Cedar Tree deal represents its largest deal. Jack in the Box continues to upgrade its digital capabilities, having launched a new ordering website and mobile app in October 2022.

Primark opened a 49,000 square-foot store in Brooklyn, NY, marking its 16th location in the U.S. Owned by Associated British Foods, Primark aims to have 60 U.S. stores by 2026. Other recent openings in New York include a 44,000 square-foot store on Long Island and a similar sized store in Queens. The chain plans to open 10 new stores in 2023, nearly doubling its presence in the country. See the map below for future openings. 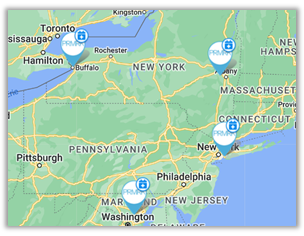 iMedia Brands executed a Purchase and Sale Agreement with Pontus Net Lease Advisors, LLC, for three of its four buildings. The transaction includes one of the Company’s two corporate headquarters buildings in Eden Prairie, MN and both of its distribution centers in Bowling Green, KY. The Company has agreed to enter into a leaseback of these properties upon closing of the sale, which is expected to occur this month. Proceeds will be used to pay down existing debt, including the $28.5 million Green Lake term loan.

Robert A. Rowe sold the seven-store Rowe’s IGA chain in Jacksonville, FL for $47 million to Trinidad and Tobago-based Massy Holdings, which operates several grocery and pharmacy formats across the Caribbean. Rowe’s will remain a part of the IGA network. Massy indicated that the acquisition is part of its plan to expand its retail footprint in the U.S., where it currently has some limited distribution operations in Florida. It remains unclear whether Massy will continue to expand its retail footprint under the IGA banner. Its retail division includes 60 stores, including supermarkets, super centers, express stores, gourmet stores, pharmacies, home goods stores, and a mega-warehouse club in St. Lucia.

American Eagle’s subsidiary, Quiet Platforms, announced a partnership with global retail services provider JLL to establish a flexible rent-as-a-percentage-of-revenue model for logistics real estate. Quiet Platforms continues to rapidly expand its nationwide network of fulfillment centers, and with its partnership with JLL, plans to accelerate the growth of its facilities network through a variable-expense model that offers more flexibility at the real estate level.

ThirdLove opened a new store in Philadelphia, PA, bringing its physical store base to nine. The e-commerce retailer teamed up with Leap, which offers brands a turnkey platform for expanding in physical retail, to open the store. Leap handles leasing, technology, and staffing, leveraging its own as well as outsourced data points to determine where a brand will most likely be successful. Leap currently partners with 60 brands across nearly 100 stores in major markets across the U.S. In addition to the Philadelphia location, ThirdLove operates in San Francisco, Walnut Creek, Venice, and Newport Beach, CA; Boston, MA; Tysons, VA; Scottsdale, AZ; and Chicago, IL.

Salad Station, a Louisiana-based salad concept with nearly 30 locations, announced its entrance into four new markets, Houma and Monroe, LA, McAllen, TX, and Pensacola, FL. The Texas location will mark the chain’s first in South Texas. The Company, which began franchising in 2015, expects to open eight locations throughout Florida and Louisiana in 2023. The Company reported 12% same-store sales growth in 2022 and a 7% reduction in systemwide cost of goods. Other salad concepts that are rapidly growing include Salad and Go, The Salad House, Just Salad, Salata, and Sweetgreen.

On December 19, 2022, Canadian fast casual chain Freshii was acquired by restaurant franchisor Foodtastic Inc. for $2.30 per share in cash, representing total consideration of $74.4 million. This represents a 142% premium to the Company’s closing share price on December 16, 2022. The transaction is expected to close in 1Q23, subject to shareholder and court approvals. Freshii currently operates 343 locations in North America and internationally. Foodtastic is a franchisor of 1,200 restaurants in Canada and generates $950 million in annual sales. Foodtastic aims to rapidly grow outside of Canada, with over 150 units now located outside its home country. Other brands include Second Cup, Pita Pit, Milestones, Fiona MacCool’s, Shoeless Joe’s, Au Coq, La Belle et La Boeuf, and Monza.

Staples (the B2B unit, known as Staples North American Delivery or Staples NAD) reportedly generated higher YOY revenue and EBITDA in 3Q22. Sales increased 3.6%, due to additional business volume in office supplies, food and break room supplies, and promotional products, while EBITDA improved 14%, to $225 million. The rate of EBITDA improvement outpaced top line gains, due to leveraging logistics costs and controlling operating expenses. During the quarter, the Company repurchased $31 million of its 10.75% Notes, due 2027, for $0.74 on the dollar. The Notes, which are rated CCC+ by S&P (seven notches below investment grade) currently trade at $76.87, implying a yield of 20%. Leverage at quarter-end remained high, at about 6x, while liquidity of over $900 million appears adequate to fund capital requirements. Most recently, the Company operated 1,025 stores in the U.S. and 300 units in Canada, down from 1,045 in the U.S. and 301 in Canada at the end of FY21.