Southeastern Grocers (SEG) announced that it completed 78 overall store improvements in 2021, including the remodel of 54 stores throughout its five-state footprint. The Company also added 19 new liquor stores to its portfolio, opened two new Winn-Dixie stores in Florida, expanded its growing Fresco y Más Hispanic grocery chain with two new locations, and launched a new stand-alone liquor store concept, WDs. Over the course of 2021, more than 70% of SEG’s total footprint has been refreshed with new products and offerings, and the Company boosted its private label products with more than 400 new items. Looking forward, SEG said in 2022 it plans to expand e-commerce capabilities and remodel more than 50 stores throughout the Southeast. Click here to request a sample list of future openings.

Under significant pressure to improve workers’ rights, Amazon has reached a settlement with the National Labor Relations Board (NLRB) to allow its employees to organize freely and without retaliation. According to the settlement, the Company will reach out to its warehouse workers, via email, that were on the job anytime since March 22 to notify them of their organizing rights. The settlement outlines that Amazon workers, which number 750,000 in the U.S., are permitted to organize onsite at its locations. According to the terms, the labor board will be able to more easily sue the Company if it found that it reneged on its agreement. This year, Amazon has faced organizing efforts at warehouses in Alabama and New York. In November, the labor board ordered a new union election for Amazon workers in Bessemer, AL, following alleged anti-union intimidation efforts by the Company.

Meanwhile, a labor group seeking to organize workers at an Amazon warehouse on New York’s Staten Island has refiled a union petition with the NLRB. The group, known as the Amazon Labor Union, first filed its request for a union vote in late October, with signatures from more than 2,000 employees. Nonetheless, last month the NLRB withdrew the petition after determining it needed wider support for a vote. The group is seeking to organize workers at four Amazon warehouses in New York City.

Amazon reportedly intends to open a warehouse in Northwest Arkansas, about 12 miles from Walmart’s headquarters in Bentonville. The property currently has a 100,000 square-foot warehouse built in 2004. The size of the warehouse suggests the site could serve as a ‘last-mile’ delivery center.

According to published reports in the U.K., Walgreens Boots Alliance may sell its Boots pharmacies to private equity firms. One report indicated Walgreens “received an acquisition approach from Bain Capital more than two months ago” and “is positioning itself as a leader in an upcoming auction for Boots after months of due diligence.” This is the latest report on the future of Walgreens’ more than 2,000 Boots pharmacies. Boots only owns about a quarter of its stores and “may be worth £6 billion ($8.10 billion) to £7 billion ($9.50 billion).” Other potential bidders include Sainsbury and Tesco. Walgreens reportedly may also be looking at other options for the Boots chain, including a possible spinoff into a separate company.

On December 29, H.E. Butt opened a new store in Clear Lake, TX, which replaced another Clear Lake store that closed late last month. The 107,000 square-foot store is almost double the size of the old store and has a broader array of products and services. The Company now has 70 stores in Greater Houston, including two in the Clear Lake area. Other grocers in the Clear Lake area include Kroger, ALDI and Food Town. Safeway’s Randalls closed a store in the market last year, along with four other Houston area stores. Click here to request a sample list of future openings.

Saker ShopRites recently announced that it has acquired the assets of Perlmart, Inc. The purchase price was not disclosed. The seven ShopRite stores purchased from Perlmart, all of which include pharmacies, are located in Ocean County, NJ, in Manahawkin, Lacey, Fischer Bay (Toms River), Manchester, Jackson, Bayville and Waretown. Saker owns and operates 32 ShopRite supermarkets, including 30 in-store pharmacies, two liquor stores, and Dearborn Market and Garden Center in New Jersey. Both Saker and Perlmart are part of the Wakefern cooperative.

Digitally native sustainable footwear competitor Allbirds has been busy growing its physical presence, with expansion plans continuing in 2022; in October, the Company opened its 34th and 35th global stores in Denver, CO and Paramus, NJ, respectively. Last month, Allbirds saw 3Q losses grow, even as revenue jumped 33% year over year. SG&A expenses increased (52.6% of revenue in 3Q21 versus 42.5% a year earlier) due to its brick-and-mortar expansion.

Wawa has closed an underperforming convenience store in Center City, PA, less than four years after the store opened. Wawa added several new locations in Center City over the past few years, including a 3,000 square-foot location in 2020 a few blocks from the recently closed store. The Company has also closed a number of other stores in the city and surrounding areas, including a Center City location in the summer of 2020, and another two in the fall of 2021. Click here to request a sample list of future openings and closings. 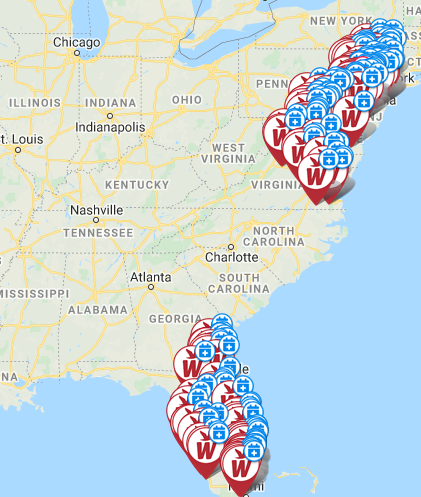 An affiliate of Monfort Cos. is acquiring eight Jack’s Convenience Stores, one Jack’s Lube & Wash oil change, and one car wash from Penta Operating LLC. The stores are located in west Texas, in Midland, San Angelo and Abilene. Four stores offer Exxon-branded fuel, while four sell Jack’s-branded fuel. Five of the locations feature car washes, and two feature Jack’s Grub N Stuff foodservice offerings. Colorado-based Monfort Cos. is actively expanding its footprint across the U.S. to include Colorado, the Midwest, Texas and the Southeast.

Vail Resorts closed on its previously announced acquisition of Seven Springs Mountain Resort, Hidden Valley Resort and Laurel Mountain Ski Area in Pennsylvania, an hour southeast of Pittsburgh, for approximately $118 million. Vail Resorts, which now operates a network of 40 resorts in three countries and 15 states, plans to add access to the three resorts to select passes for the 2022-23 season.

AMC Theatres announced last week that it has acquired two theatres, one each in the Los Angeles and Chicago markets, and plans to reopen them. The Company expects to open the AMC Northridge Fashion Center 10 (formerly a Pacific theater) in Northridge, CA this spring, and the AMC Chicago 14 (formerly Arclight) in the Lincoln Park neighborhood under a new name, also in the spring. AMC remains in “active discussions with other property owners regarding additional currently closed locations.” Chairman and CEO Adam Aron commented, “These theatres have previously been high-traffic, successful locations, in two of AMC’s top markets, and we are pleased to offer the AMC experience at [these locations] a few months from now in 2022. These are prime examples of how AMC is staying on offense, looking for opportunities to strengthen our company through the acquisition of these popular locations. Our most recent acquisitions of AMC The Grove 14 and AMC Americana at Brand 18 are already showing their success, as those locations routinely finish in the top 10 theatres in box office performance among more than 150 theatres in the LA market, and in the top 30 in the entire United States.”

S&G Stores LLC acquired the Barney’s Convenience Stores chain. The end-of-the year transaction included 12 c-stores in the Toledo, OH market. Eleven of the stores are branded BP, and one is branded as Amoco. S&G’s portfolio now numbers 74 convenience stores. S&G will retain Barney’s employees, and the sites will operate under the BP brand.

Gabriel Brothers (Gabe’s) closed its store in Abingdon, MD, northeast of Baltimore, in late December after 28 years in operation. The space will house Hobby Lobby and ALDI stores, expected to open sometime in 2022. Gabe’s continues to operate three stores in the Baltimore metro market, with a total of five in the state.

Gabriel Brothers is a deep discount retailer, with roughly 120 stores in 14 states under the Gabe’s banner. The Company competes with off-price and close-out retailers like TJX, Ross, Burlington and Ollie’s Bargain Outlet, although Gabe’s sells only apparel, housewares and gadgets. The Company just opened 16 new stores from 2012 to 2020 but ramped up expansion in 2021, opening nine new locations and breaking ground on a new distribution center. Click here to request a sample list of future openings and closings.

Brazilian footwear company Alpargatas, known for its Havaianas flip-flop brand, announced its acquisition of a 49.9% stake in direct-to-consumer sustainable footwear brand Rothy’s. In the two-step deal, Alpargatas will first invest $200 million in primary capital in Rothy’s, then acquire around $275 million in Rothy’s shares. Alpargatas has the option to obtain additional shares between the first and fourth anniversary of the transaction. The deal will result in a post-investment valuation of $1 billion for Rothy’s; co-founders Stephen Hawthornthwaite and Roth Martin will maintain “a significant equity stake” and continue to oversee operations. Rothy’s will use the capital to fuel international growth, including increasing its presence in Asia, Europe and Brazil, as well as “building [its] physical retail presence, advancing product development and accelerating [its] goal to reach circular production by 2023.” While 98% of sales are from digital channels, Rothy’s has brick-and-mortar stores in San Francisco, Boston, Washington, D.C., New York City, Los Angeles and Chicago. Alpargatas’ CEO Roberto Funari sees the deal as a way to boost the Company’s relevance in North America. Alpargatas owns and operates six factories in Brazil, while Rothy’s owns and operates a 300,000 square-foot factory in Dongguan, China.

Click here to request a copy of this Special Analysis.