With the takeover price for its equity falling by some $2 billion to $7 billion in the few months since takeover speculation mounted earlier this year, Kohl’s rejected the lowered $53 per share offer from Franchise Retail Group (FRG). The lower valuation was blamed on the eroding retail and financing environment. Kohl’s outlined the sale process, which included interest from more than 25 bidders, over 20 signed NDAs, leading to the prior $60 per share offer from FRG. Kohl’s management said that it remains “committed to creating value for shareholders” and is “exploring further opportunities in the near and long term.”

The board reaffirmed a $500 million accelerated share repurchase program to commence immediately following its 2Q22 results, as part of a previously disclosed $3 billion share repurchase authorization. Kohl’s share price closed at $28.68, down 47.7% from a year ago. The Company is also reevaluating monetization opportunities for its real estate portfolio. This could involve sale-leasebacks, which activist investor Macellum had supported; management previously said it would not pursue sale-leasebacks, but now suggested it may be more open to them. As of its FYE January 29, Kohl’s owned 410 locations, leased another 517 and operated ground leases on 238 of its shops. Macellum estimated the owned real estate could be worth $8 billion. As we speculated, Kohl’s also lowered its outlook, noting inflation is cutting into consumer spending and expects sales to fall at a high single-digit rate in 2Q. Click here to request more info.

Target completed its 1,000th store remodel, featuring its latest in-store design, which includes new colors, lighting and signage; updated layouts; and more shop-in-shop experiences. The Company said it has seen a 2% – 4% sales bump in updated stores in the first year post-remodel, as well as increased loyalty from new and existing customers. The Company has nearly 200 full-store remodels planned for 2022 and is undertaking almost 200 fulfillment remodels, which specifically focus on building capacity for its same-day services, such as Order Pickup and Drive Up. Also, at another nearly 200 select stores, the Company will add Drive Up canopies to the exterior. About one-half of the 400 projects were initiated in 1Q22. Click here to request a sample list of future store openings.

Panera delivered a written notice of termination of its initial agreement with USHG Acquisition Corp. on Friday since a merger with Danny Meyer’s special purpose acquisition corporation (SPAC) had not been completed on or prior to June 30, 2022, according to an SEC filing. Both companies have agreed not to extend the agreement due to “unfavorable capital market conditions, including the deterioration of the market for initial public offerings over the past several months.” Click here to request a sample list of future store openings. 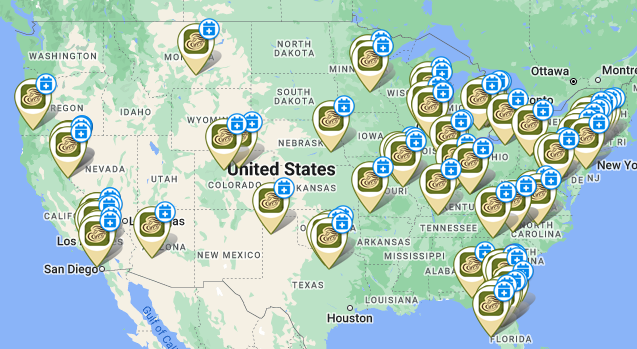 On July 13, Lidl US will open its first store in Baltimore, MD. The Company also recently opened a store in North Hempstead, on New York’s Long Island, and unveiled plans for a third store in Washington, DC. Click here to request a sample list of future store openings.

H&M’s 2Q22 revenue rose 17.2% (12% in local currencies) to $54.50 billion; sales increased 17% in local currencies excluding the impact of about 181 stores closed in Russia, Belarus and Ukraine. Sales advanced in all markets (a notable 30% increase in North and South America), except for Eastern Europe; operating income jumped 29.5%. As of May 31, 196 stores were still temporarily closed, including 15 in China due to the pandemic. Pre-COVID, in FY19, these markets accounted for 10% of the Company’s operating profit. Sales in the month of June are expected to decline 6% in local currencies, reflecting the impact of the Russia-Ukraine war, but also a tough comparison with June 2021, when sales rose 24%. H&M opened one store and closed 18 in 2Q22, ending the quarter with 4,702 locations. In FY22, the Company plans to open 94 stores, primarily in growth markets (16 opened to date) and close 272; 240 were previously expected to close.

Skechers opened a nearly 22,000 square-foot “superstore” at Jersey Gardens, in Elizabeth, NJ, replacing a nearby 2,900 square-foot Skechers store. The location features dedicated Skechers Performance and Skechers Work in-store shops, a 4,000 square-foot apparel shop, and casual footwear and athletic styles for men, women, and children. The Company operates more than 540 locations across the U.S., in addition to 3,700 international locations. Click here to request a sample list of future store openings. 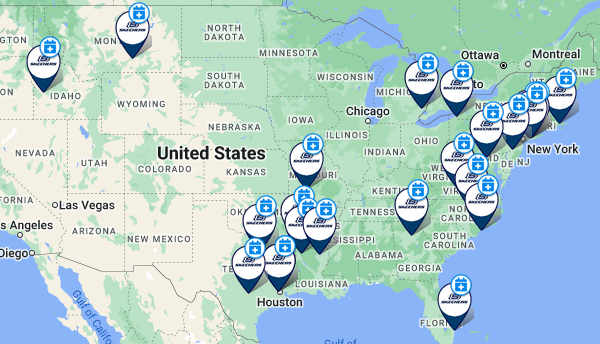 Bed Bath & Beyond’s 1Q22 net sales fell 25% to $1.46 billion, which consisted of a 23% decline in comps and a 2% drop from store closures. By channel, in-store sales fell 24%, while digital sales were down 21%. Bed Bath & Beyond banner comps decreased 27%, buybuy BABY comps fell mid-single digits, and Harmon comps were positive. The sales decline was driven by shrinking demand in destination home categories; comps are in the negative 20% range thus far into 2Q22. Click here to request a sample list of future store openings.

ABC Supply opened a new location in Missoula, MT, its second in the state, joining a store in Billings. The Company operates over 800 locations across the U.S.

lululemon announced plans to open two new stores and launch a local e-commerce site in Spain later this year. The stores are slated to open in Madrid and Barcelona in September. This is the first new market in Europe for lululemon since 2019, and is part of the Company’s target to double its international revenue from $6.25 billion in 2021 to $12.50 billion by 2026. International sales were $3.30 billion in 2018. Currently, the Company operates nearly 40 stores in eight countries in Europe (France, the U.K., Ireland, Germany, the Netherlands, Norway, Sweden and Switzerland). Click here to request a sample list of future store openings and closings.

Yum! Brands recently said it is in advanced talks to sell its KFC restaurants and franchise rights in Russia to a local buyer, through which the Company plans to fully exit the country. Yum completed the sale of its Pizza Hut business to a local operator who is rebranding the restaurants. In March 2022, Yum! Brands joined other Western brands in suspending all operations and investments in Russia following the country’s invasion of Ukraine.

Boosted by significantly higher retail fuel prices, Alimentation Couche-Tard’s 4Q22 revenue rose more than 34% to $16.43 billion. Total merchandise and service revenues were $3.80 billion, an increase of 1%; same-store merchandise revenues increased 2.3% in the U.S. The Company indicated that comp fuel volume decreased 1.7% in the U.S., while gross profit of 46.12 cents per gallon was up 11.67 cents. Fuel margins remained healthy throughout Couche-Tard’s North American network due to favorable market conditions and the continued optimization of the supply chain. During 4Q22, the Company completed the sale of 44 sites to various buyers for $51.5 million. Couche-Tard also completed the construction of 42 stores and the relocation or reconstruction of 16 stores in 4Q, for a total of 133 units in FY22. As of April 2022, another 58 stores were under construction and are expected to open in the upcoming quarters.

H-E-B is adding frozen capabilities to its distribution facilities in Temple, TX through a 325,000 square-foot expansion. The Temple DC supplies more than 100 H-E-B stores across the region. The Company plans to bring its flagship H-E-B brand stores to the DFW Metroplex this year, with stores slated to open in Frisco and Plano in the fall. Click here to request a sample list of future openings. 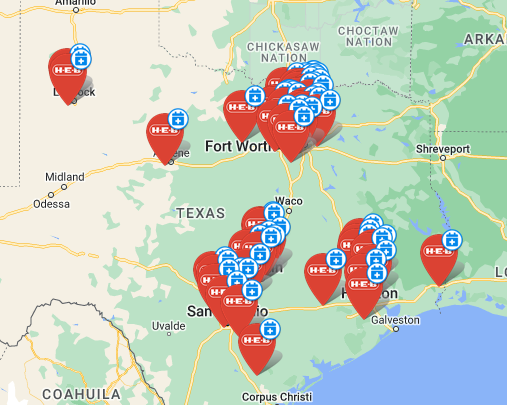