On June 21, L Brands announced the public filing of a Form 10 registration with the SEC to separate Victoria’s Secret business into an independent, public company. The separation is expected to be completed in August 2021, and each standalone company will set its own capital allocation policies. The Company provided an investor presentation that outlines detailed information on each business, strategy, and historical financial results. Click here to request more information.

Target is on track to complete major remodels in about 150 stores this year, with everything from modern fixtures and updated lighting to enhanced experiences and the latest in health and safety. The remodeled stores will join the more than 800 locations Target has upgraded during the past four years. The Company said it is expanding and upgrading its guest services, order pickup, and drive-up areas in its latest round of remodels to make the services even more convenient. Other features will include touchless bathroom fixtures and hand-sanitizing stations. Select remodeled locations will incorporate new “shop in shop” experiences from Ulta Beauty, Apple, and Disney. Click here to request a list of future store openings.

Amazon will open an 820,000 square-foot robotics fulfillment center in Baton Rouge, its second in Louisiana, to ship small-size items such as books and toys.

Separately, Amazon reportedly has placed an order for 1,000 autonomous driving systems from self-driving truck technology startup Plus. The Company is also in talks to buy a stake of as much as 20% of Plus based on its shares outstanding before Plus’ planned merger with special purpose acquisition company (SPAC) Hennessy Capital Investment Corp. V. Plus, a Sequoia Capital China-backed company, is developing autonomous driving technology for long-haul trucking. Plus is set to have a valuation of $3.3 billion, adding $500 million in proceeds to accelerate its expansion, according to a Company statement in May.

A recent forecast by FTI Consulting indicated Amazon’s annual Prime Day sales event, which began on June 21 and ran through June 22, stands to give a sizable boost to online retail sales growth this year. U.S. online retail sales are projected to hit $865 billion in 2021, up 13.5% from 2020, when the COVID-19 pandemic fueled a 32% uptick to $762 billion (according to FTI data). Nearly two-thirds of Amazon Prime Day shoppers polled said they plan to spend more during this year’s event than in 2020. In an FTI survey of 1,000 U.S. consumers who made a purchase during Prime Day in 2020, 62% said they aim to spend more this year on Prime Day, with 36% reporting that they plan to spend significantly more. Just 9% of respondents said they expect to spend less on Prime Day this year.

Separately, Luby’s announced yesterday it will sell the Luby’s Cafeteria restaurant business to a newly formed affiliate of Calvin Gin. The purchase by the Gin affiliate, which will be renamed Luby’s Restaurants Corporation following closing of the transaction, will include 32 of existing Luby’s restaurants, all located in Texas; as well as ownership of the Luby’s Cafeteria brand.

The sale of the Fuddruckers and Luby’s Cafeteria are part of the Company’s previously announced plan to sell its assets, pay its liabilities, and return the remaining cash to shareholders under a formal plan of liquidation and dissolution approved by its shareholders last November. Luby’s is still actively seeking buyers for its Culinary Contract Services business segment as well as its real estate assets related to its operations.

Hudson’s Bay Company announced it has entered into a partnership with Insight Partners to establish Saks OFF 5TH’s e-commerce business as a standalone entity. Insight Partners has led a $200 million equity investment in Saks OFF 5TH’s e-commerce business, valuing the Company at approximately $1.00 billion. HBC will retain 80% ownership of the new entity and will receive 3% of net sales. Saks OFF 5TH’s store fleet, consisting of 105 locations across the U.S. and Canada, will be a separate entity, referred to as O5, and will remain wholly owned by HBC. Paige Thomas has been appointed president and CEO of the new digitally native Saks OFF 5TH business. Ms. Thomas will also serve as a member of the board. HBC reported liquidity of more than $500 million at the end of 1Q21, amid improving operating results, and received $100 million from the investment.

Wawa is adding stores in New Jersey, with plans to open nine c-stores across the state by the end of the year, in Bridgeton, Deptford, Eatontown, Edison, North Brunswick, Pennsauken, Robbinsville, and two locations in Brick. Additionally, new stores have been approved for Freehold Township, Hazlet, and Lakehurst, as well as a third in Brick. Click here to request a list of future store openings.

Dick’s Sporting Goods plans to open the first of two Public Lands stores in a converted 50,000 square-foot former Field & Stream store in Cranberry Township, PA on September 24; a second location, also a former Field & Stream store, is set to open soon after in Columbus, OH. Public Lands is an outdoor omnichanel retail concept offering an experiential approach to shopping, with an array of merchandise in climbing, cycling, paddling, and camping, along with equipment rental. Click here to request a list of future store openings and closings. 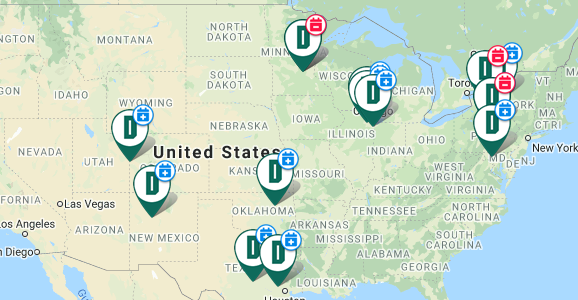 On June 17, Google opened its first-ever physical store in the Chelsea neighborhood of New York City, in a 1.2 million square-foot building that is home to Google’s New York City offices. Similar to Apple stores, the location invites interaction with Google products and services.

At Home Group announced that it has entered into an amended merger agreement under which private equity company Hellman & Friedman (H&F) will acquire all outstanding shares of At Home for $37 per share in cash. The amended offer is an increase from the previous $36 per-share offer and values the Company at $2.8 billion, including the assumption of debt. Under the revised agreement, H&F will commence a tender offer on or before tomorrow. On June 14, the 40-day “go-shop” period expired; only one party signed a nondisclosure agreement, and none expressed interest in pursuing a potential transaction. On the same date, the waiting period under Hart-Scott-Rodino expired. Upon completion of the transaction, At Home will become a privately held company, and At Home’s shares will no longer trade on the NYSE. Click here to request a list of future store openings. 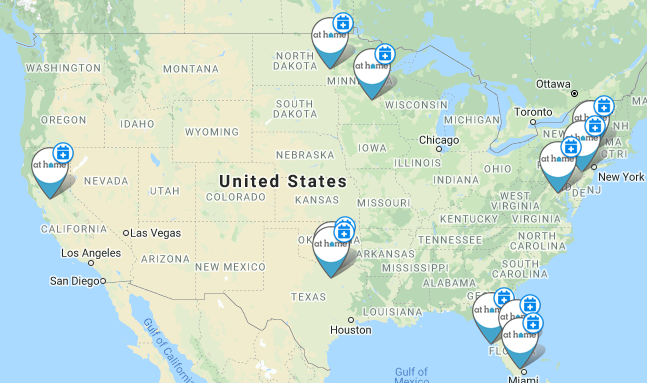 Bojangles signed franchise agreements with Sajib Singha and Asish Baidya of SAT Restaurant Group, LLC and Khalid Siddiqui of LASH Foods, LLC for each to open three locations in the Dallas-Fort Worth and Houston markets, respectively. Bojangles will also open 15 corporate-owned restaurants in the Dallas-Fort Worth market. The franchise agreements outline plans to open the first units in the two metro markets in 1H22. The first Company-owned restaurant will open in Dallas-Fort Worth as early as 1Q22. The latest expansion represents Bojangles’ third major franchise development this year. In March, the Company signed an agreement with franchisee Jeff Rigsby to open 45 new stores, including 15 in the new market of Columbus, OH; in May, Bojangles inked a deal with Chaac Foods Restaurants to open 40 new stores, including 15 in Orlando, FL. Click here to request a list of future store openings.

Wingstop is rolling out a delivery-only brand called Thighstop at more than 1,400 Wingstop locations in the U.S., as part of an effort to address consumers’ fear of a chicken wing shortage. The Company is using its stores as dark kitchens to prepare the virtual menu. Wingstop’s five U.S. ghost kitchens, including a CloudKitchens facility in Ohio, will also be selling Thighstop. Beginning today, customers have new options available on Thighstop.com and through its delivery partner DoorDash. Click here to request a list of future store openings. 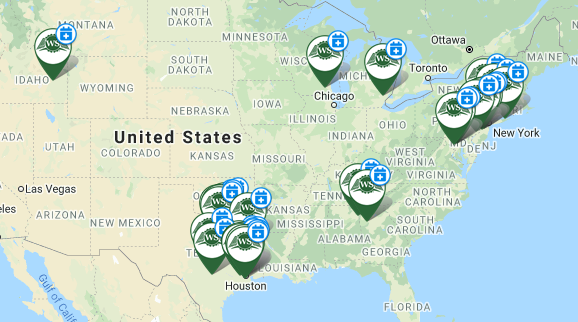 Neiman Marcus released highlights of its 3Q21. Comparable sales rose 44% but were down 6.6% compared to 1Q19. Neiman Marcus reported quarterly EBITDA of $116 million compared to a loss of $49 million a year ago. At quarter-end, the Company had $1.1 billion of debt down from $5.1 billion at the end of 3Q20. Neiman reported liquidity of $850 million, up from $132 million in the same period last year. The Company stated it plans to invest more than $500 million over the next three years to refresh stores, speed up its supply chain, and improve the digital business.

In other news, Neiman Marcus announced its intent to acquire Stylyze, a Seattle-based technology business with a machine learning SaaS platform that offers product attribution data and content to power relevant shopping experiences. Terms of the deal were not disclosed. The acquisition is intended to be part of a more than $500 million investment over the next three years to support the Company’s integrated luxury retail strategy.

QuickChek is preparing to open six new locations across New Jersey this summer, in Hackettstown, Hamilton Township, Piscataway, Roxbury, Somerset, and Somerville. The new store openings follow QuickChek’s acquisition by Murphy USA in a $645-million deal, which closed at the end of January; the deal added 157 c-stores to Murphy USA’s portfolio, bringing its network to approximately 1,660 stores.

Red Robin Gourmet Burgers expanded its partnership with Donatos Pizza to add Donatos’ items to the menu at approximately 120 additional restaurants by the end of calendar 2021, for a total of more than 200 locations with the offering. In 2Q21, 41 Red Robin locations rolled out Donatos, including in six new states: Idaho, New Mexico, Utah, Nevada, Oregon, and Washington. Donatos was also added to Red Robin menus in Arizona and Seattle, WA. The partnership will expand to several East Coast Red Robin restaurants in Maryland and Virginia in 3Q21, followed by a California expansion through the back half of the year. Donatos Pizza originally partnered with Red Robin in June 2018, offering its pizzas as part of Red Robin’s menu items. Click here to request a list of future store openings.