Amazon Fresh opened a new 40,000 square-foot store in Bloomingdale, IL, marking its fourth location in the state. Amazon Fresh currently operates 11 stores, with the first opening just this past September. It is currently seeking to open at least 28 more Fresh locations across the country.

Amazonwill open its first fulfillment center in Amarillo, TX, expected to open in 2022. The one million square-foot facility will ship larger-sized items such as furniture. Click here for a list of Amazon future store openings.

Last week, Kroger announced it would close three more stores in Los Angeles, after the city passed a “hero pay” ordinance mandating a $5 pay increase for grocery and pharmacy workers. Two Ralphs stores and a Food 4 Less will close permanently on May 15. The Company said the three stores were already underperforming, and the Los Angeles mandate accelerated their closures. According to a statement from Kroger, the mandate will add an additional $20.0 million in operating costs over the next 120 days, making it financially unsustainable to continue operating the underperforming locations. Kroger has been fighting back against the hazard pay mandates passed by several municipalities in recent months. In Long Beach, CA, it already announced the closure of two stores in response to that city’s “hero pay” ordinance. 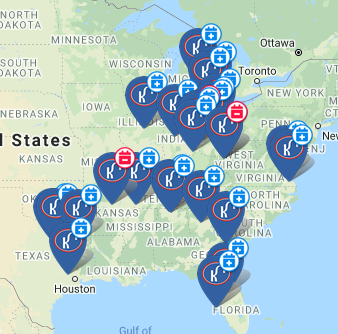 On March 2, Michaels agreed to be acquired by Apollo Global Management for $5.00 billion. Yesterday, Apollo’s affiliate, Magic MergoCo, Inc., commenced a cash tender offer for all issued and outstanding shares of Michaels’ common stock at $22 per share in cash. The offer represents a premium of 78% to the 90-day volume weighted average price, as well as a premium of 47% over Michaels’ closing share price on February 26, the last trading day prior to press speculation about the potential transaction. The tender offer will expire on April 12. It should be noted that if the Company terminates the deal, it would be required to pay Apollo a fee of up to $104.0 million.

In fiscal 2021, Michaels plans to open approximately 33 Michaels stores, including approximately 10 relocations. The Company’s previously stated capital investment plan, prior to the Apollo acquisition news, was for 15 net new stores in FY21. CEO Ashley Buchanan had commented, “As a private company, we will have financial flexibility to invest in, expand, and improve our retail and digital platforms.” It appears the Company will look to accelerate the growth in its investment. Click here to request a list of future store openings.

Asian supermarket chain H Mart plans to open its first store in Florida, in Orlando. The Company plans to convert the recently purchased space into an H Mart much larger than the typical store’s footprint, which averages 50,000 square feet. H Mart currently operates more than 80 stores across 16 states. Click here to request a list of future store openings. 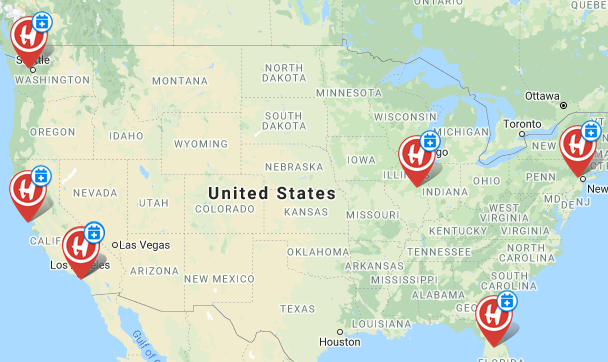 Walmart is closing a North Dallas, TX Supercenter and converting it to a fulfillment center for online delivery and pickup. The conversion is expected to take about a year. Both general merchandise and grocery orders will be filled from the center. Customers will be able to pick up orders, but the store will no longer be open for in-store shopping. Walmart currently operates about 170 Supercenters, Neighborhood Markets, and Sam’s Clubs in the Dallas-Fort Worth market.

Walmart Canada is investing more than $500.0 million this year in its store network, with a focus on refurbishing and refreshing stores across the country. This marks the largest annual investment in store upgrades Walmart Canada has made. After the work is completed, more than 60% of Walmart Canada’s stores will be upgraded this year. 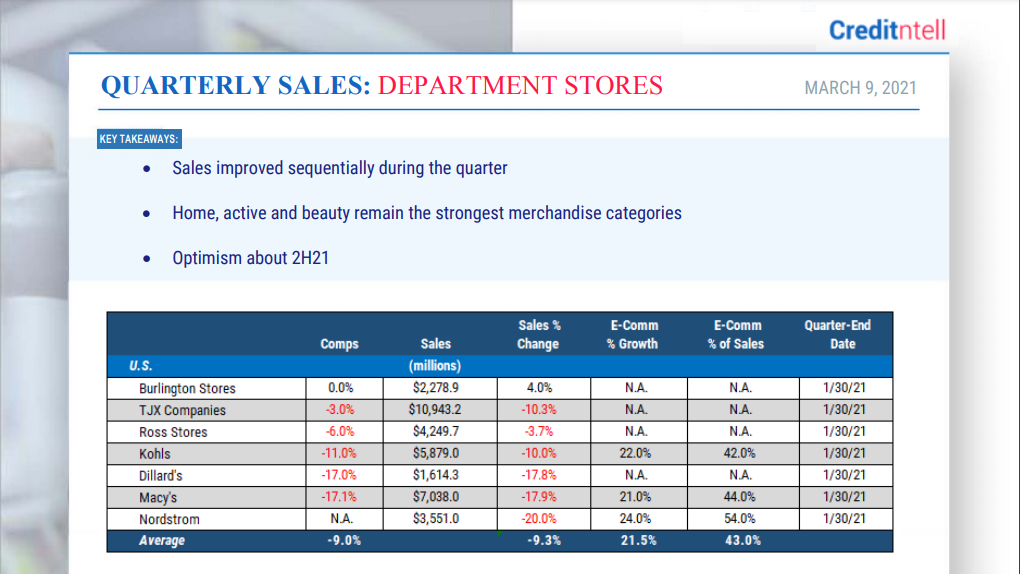 Our Quarterly Sales Analysis details industry trends and how competition stacks up in terms of sales performance metrics. Click here to request a copy of the report.

Biglari Holdings’ Steak ‘n Shake is opening 12 new restaurants by the end of 1Q21. This is in addition to the 33 Steak ‘n Shake units opened in 4Q20. The Company noted it recently became debt-free. Biglari closed underperforming Steak ‘n Shake restaurants and switched to a new owner-operator model. The Company explained that unlike a typical franchising opportunity, which could cost more than $2.0 million, Steak ‘n Shake’s program requires aspiring owner-operators to invest $10,000 and “demonstrate exemplary service as an operator.” Steak ‘n Shake is also investing significant sums to remodel all of its restaurants. In the last 12 months, the Company has fixed its unit economics (revenues and costs associated with its business model, specifically expressed on a per-unit basis).Click here to request a list of future store openings.

Grocery Outlet opened a 23,000 square-foot store in East Norriton, PA in a former Genuardi’s supermarket. The store will compete with other discount grocers that have expanded in the region, including Lidl and Aldi, in addition to other chains that have increased their presence such as Giant, Acme, and Sprouts Farmers Markets. Click here to request a list of future store openings.

Empire Company Ltd., parent of Sobey’s, signed a deal to buy a 51% stake in specialty grocery store chain Longo’s and its Grocery Gateway e-commerce business for $357.0 million. Longo’s has 36 locations in the Greater Toronto area, while Grocery Gateway serves 70,000 customers. The deal, which is subject to customary closing conditions, is slated for completion in Empire’s 1Q22.

Lord & Taylor’s new owner, investment firm Saadia Group, plans to relaunch the Lord & Taylor e-commerce site next month, with an initial focus on men’s and women’s clothing, beauty, and home. According to reports, Saadia has assembled a “full team” for Lord & Taylor, and it is currently interviewing for a president. Saadia acquired the intellectual property and e-commerce assets of the retailer in October 2020 from Le Tote, DIP for $12.0 million. All physical Lord & Taylor stores were liquidated as of February 2021. Saadia also acquired the e-commerce business and related intellectual property of RTW Retailwinds, the parent of New York & Company. Click here to request a list of store closures.

Camping World signed a deal to acquire Nielson RV, which includes two RV dealership locations in St. George and Hurricane, UT. The deal is anticipated to close in spring 2021. The Company operates 174 stores in 38 states, including three in Utah. Click here to request a list of future store openings.

Schnuck Markets will debut a smaller, fresh-food-driven concept called Schnucks Fresh. The 18,000 square-foot Schnucks Fresh store is expected to open in Jasper, IN this summer. The format will feature a “heavy focus” on fresh departments such as produce, meat, seafood and bakery. The store will mark the Company’s seventh location in Indiana, where it has six supermarkets in the Evansville area.

The Fresh Market announced it has confidentially submitted a draft registration statement relating to a proposed IPO of its common stock. It plans to use the proceeds for general corporate purposes, which may include the repayment of debt. The IPO is expected to take place following a SEC review. The Company has seen operating performance significantly improve due to COVID-19 eat-at-home trends, and Apollo, which has yet to receive any material return on its investment, is likely to cash in on this sudden change of fortune. Click here to request a list of store openings and closings.

Piggly Wiggly will open a 46,000 square-foot store in Mobile, AL in a former Winn-Dixie store later this year.

On March 11, WOWorks, the parent company of Saladworks, Garbanzo Mediterranean Fresh, and Frutta Bowls, announced it has acquired The Simple Greek, a franchise of fast-casual Greek restaurants. Terms of the deal were not disclosed.

Private equity firm Sentinel Capital Partners said March 10 that it has completed the sale of Pet Supplies Plus to Franchise Group for approximately $700.0 million. Pet Supplies Plus has about 560 stores across 36 states.

WHP Global, a New York-based firm that acquires global consumer brands, announced it has acquired a controlling interest in Tru Kids, the parent company of the Toys R Us and Babies R Us brands. Financial terms of the deal were not disclosed. WHP is backed by a $350.0 million equity commitment from funds managed by Oaktree Capital Management. WHP plans to open a number of Toys R Us stores in the U.S., ideally ahead of the 2021 holiday season. Management is evaluating various formats including flagship stores, pop-ups, airport locations, or mini stores inside other retail locations. WHP has not yet targeted the number of stores it plans to open in the U.S.

The ODP Corporation rejected a proposal from USR Parent Inc., the Sycamore-affiliated owner of Staples, to acquire various ODP assets. Staples’ offer on March 10, after its initial proposal was rejected, suggested that the companies sell certain ODP assets in order to seek and receive regulatory compliance. Additionally, the proposal did not include any obligation on the part of Sycamore or Staples to proceed with the transaction, agree to a purchase price, or assume any related regulatory risk. The Company restated that it would consider merging its retail and consumer-facing e-commerce businesses with Staples. Click here to request more information.