Raley’s Holdings has signed an agreement to acquire Bashas’ later this year. Reportedly, this deal has been in the works for 14 months when Raley's approached Bashas' with an unsolicited offer; we previously speculated Raley’s and Bashas’ could both be interested in pursuing some type of strategic transaction given their relatively small size and the challenges of operating independently, especially in the age of e-commerce. The combination will create an entity generating nearly $5 billion in pro-forma annual sales across its ~240 stores. As a fully formed operating company within Raley’s, Bashas’ will retain its corporate headquarters, stores, and distribution center; it does not anticipate closing any stores. Click here for more info.

Sears closed its last store on Long Island, NY located in Sunrise Mall in Massapequa. It was the 10th to shutter on Long Island since 2018 when the Company began closing across the country. Transformco, which took over 223 Sears and 202 Kmart locations, reached an agreement with Urban Edge in September to terminate Sears’ leases at the Sunrise Mall, Bruckner Commons in the Bronx, and one Puerto Rico location. Urban Edge agreed to pay $20 million to get control for the three spaces effective October 15. Sears announced it will close its last outposts in Illinois and NYC in November. We approximate that there are only 35 Sears locations left in the U.S. Click here for a complimentary list of future closures. 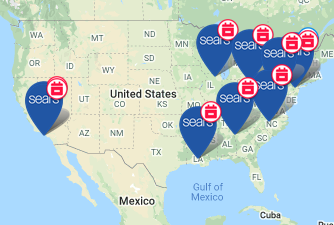 Ross Stores added 18 Ross Dress for Less and 10 dd’s Discounts locations in September and October, completing its goal of opening 65 new stores in FY21, including 45 Ross and 20 dd’s. The Company remains committed to expanding to at least 2,400 Ross Dress for Less and 600 dd’s Discounts units over time, up from the current more than 1,629 Ross and 295 dd’s stores operating nationwide. Click here for a list of recent and future openings and closings. 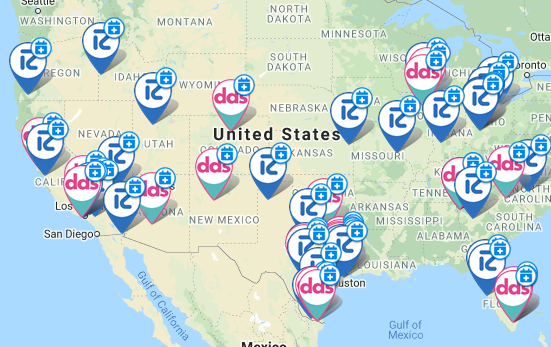 Village Super Market's sales increased 7% in 4Q21 due to an additional week during the quarter. Excluding the additional week, sales fell 0.1% due to the closure of the Silver Spring, MD store in February 2021 partially offset by the Fairway acquisition completed on May 14, 2020 and a 0.1% increase in same store sales. On a two-year stacked basis same store sales increased 7.4%. Average basket size decreased, transaction counts increased and same store digital sales decreased 22% (on a two-year stacked basis same store digital sales increased 172%) as the initial months following the COVID-19 outbreak were cycled in. Additionally, food inflation and increased SNAP benefits positively impacted sales. According to the Company, sales levels in Manhattan continue to be negatively impacted by residential population migration out of the city and less commuter and tourist traffic. Operating income was $13.9 million, up from $9.7 million last year.

REI opened its first small-format store, a 6,500 square-foot location, in Cambridge, MA. The store features an assortment of equipment, including hiking apparel and boots, rock-climbing accessories, bicycles, and hats, belts, and other accessories. REI first entered the Massachusetts market in 1987 in Reading, and has since expanded to Fenway, Framingham, and Hingham. Elsewhere in New England, REI opened stores in North Conway, NH and Williston, VT in 2019, and a store in Westbrook, ME is due to open this fall.

In other news, REI plans to close its 171 stores, activity centers, distribution centers, call centers, and headquarters on Black Friday for the seventh year in a row. REI remains the only major retailer that closes for both Thanksgiving Day and Black Friday. Click here for a sample list of future openings. 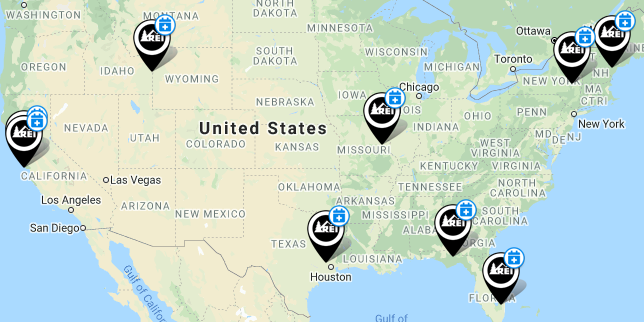 On October 6, Dillard’s opened a new, 100,000 square-foot store in Mesa Mall in Grand Junction, CO, its first new store opening in years and its ninth location in the state. The Company first announced the planned opening in a former Sears location in February 2019; it was originally set to open in 3Q20, but construction was delayed due to the pandemic. The Company also anticipates opening a store at University Place in Orem, UT in Spring 2022, replacing the Provo, UT store closing this year. The Orem location previously housed a Macy’s that was demolished last year. The Company operates 281 stores nationwide.

Schnuck Markets’ top line reportedly fell 6.5% in its fiscal year ended September 2021, to about $2.90 billion. The decline was primarily due to the Company’s sale of its retail and specialty pharmacy businesses to CVS in March 2020. The Company recently opened its first “Schnucks Fresh” store, in Jasper, IN, an 18,000 square-foot store focusing on fresh departments. This followed the June 2020 debut of another new store format in Columbia, MO, which focuses on health and wellness as well as natural foods; it is dubbed “EatWell, A Natural Food Store by Schnucks.”

Meanwhile, Schnuck Markets is raising its minimum wage for most associates to $12.10 per hour, effective October 11. The increase comes as the Company is facing labor shortages, which has driven up wages in multiple industries. Schnucks’ stores in Missouri, Illinois, Indiana and Wisconsin began closing an hour early this week. Schnucks has also shortened hours at all of its meat, seafood and deli service counters, attributing the need to make the adjustments to the "challenging labor market as well as evolving customer shopping patterns."

Sportsman’s Warehouse opened an 18,000 square-foot store in Pittsburgh, PA on October 8, its 115th location nationwide. The Company also operates Pennsylvania locations in Washington, Altoona, Erie, Chambersburg, and Camp Hill. Over the summer, the Company opened two stores, in Grand Island, NE and Murrieta, CA. Later this month the chain expects to open a 32,000 square-foot location in Lady Lake, FL in a former Stein Mart. Click here to request a list of future openings.

Arhaus filed a registration statement with the SEC for a proposed IPO of its Class A common stock, with the number of shares and price range to be determined. The Company applied to list on the Nasdaq under the symbol “ARHS.” Arhaus, a premium home furnishings retailer that offers an assortment of heirloom quality products, reported $355 million in sales during 1H21, and $16 million in net income. The chain has 75 retail stores and design center locations across the U.S., an e-commerce site, and a team of interior designers providing complimentary in-home design services. Click here to request a list of future openings.

The Arts & Crafts segment had a banner year from the second half of 2020 through early 2021, prompting a takeout offer of Michaels and allowing Joann, Inc. to launch an IPO. Joann struggled recently following last year’s results buoyed by fabric and mask making materials and a growing desire for stay-at-home hobbies, Hobby Lobby has shot past the other two major competitors with sales surpassing $6 billion in 2020 and EBITDA margins reportedly back over an impressive 20%. The Company has had minimal store closures and continues to open about 50 stores per year the last few years, including during the pandemic. Click here to request a list of future openings. 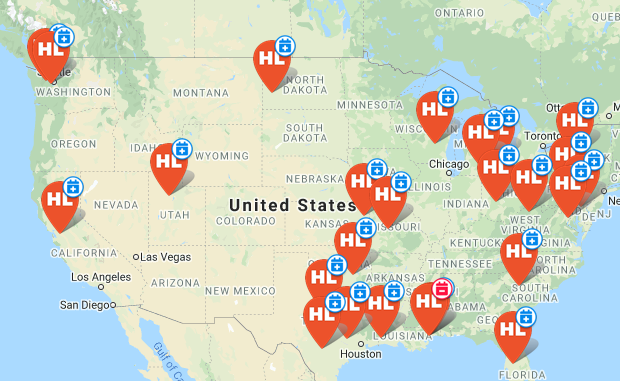 Floor & Décor is opening an 80,000 square-foot store in Oxnard, CA on October 14. This will be the Company’s 25th location in California. Earlier this year, it opened stores in Bakersfield and Fresno. Floor & Décor operates more than 150 locations in 33 states. Click here for a sample list of future openings. 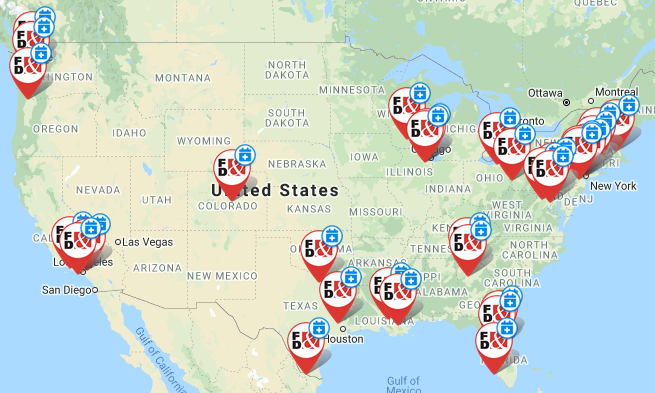 The Kent Kwik convenience store brand is expanding its footprint to North Carolina and South Carolina through its acquisition of Bountyland Petroleum and Bountyland Food Service assets. The deal includes 11 Company-operated, Exxon branded Bountyland stores, as well as both branded and unbranded dealer wholesaler supply accounts, and a trucking company. The acquisition will grow the Kent Cos.' portfolio to 72 Company-owned and operated c-stores in Texas, New Mexico, Oklahoma, Tennessee and the Carolinas. The acquired stores will continue to operate as Bountyland Quick Stop branded stores with ExxonMobil fuel.

Del Taco Restaurants said October 6 that it has signed a deal with North Carolina-based franchise group RamRestaurants Inc. to open five units within the Raleigh and Durham, NC areas. The deal, expected to bring Del Taco restaurants to North Carolina for the first time, comes only weeks after Del Taco announced a development agreement for Southern Virginia. Click here to request a list of future openings.

Costco’s FY22 got off to a roaring start with September sales up almost 16% to $19.50 billion. Total Company comps (ex-fuel) improved 9.4% and e-commerce jumped 9.6%. This follows FY21 results when sales grew about 18% with a 13% comp improvement. E-commerce was up 42%. The September performance was driven by a mid-high single digit comp improvement in sundries and fresh foods while the non-food category was up low double-digits. The Company plans on opening 25 new clubs in FY22. Click here to request a list of future openings.

Meijer will open a 42,000 square-foot location in downtown Detroit, MI later this month. The Rivertown Market is the Company’s fourth smaller format grocery store (Meijer’s stores average about 200,000 square feet). Meijer has opened three downsized formats since 2018, when the first one was built in Grand Rapids, MI. Click here for a complimentary list of recent and future openings.

7-Eleven’s first store in India opened on October 9 in Mumbai. The new store is being operated by 7-India Convenience Retail Limited, a wholly-owned subsidiary of Reliance Retail Ventures Limited (RRVL). The two-story, 1,700 square-foot location will feature a café. Click here for a complimentary list of recent and future openings.

Stater Bros.’ FY20 sales increased around 10% in line with industry trends, which is a strong pickup vs. prior years. To differentiate itself in a very saturated market, and better position itself from Aldi’s spartan format, Stater Bros has started remodeling its store base with improved signage, wider aisles, and fresh and full-service offerings such as delis, hot-bakery, sushi, meat, and seafood departments. The Company is also taking steps to better position itself for e-commerce, recently signing a partnership with Mercatus. During the year, the Company refinanced its debt which included a sizeable repayment; debt to EBITDA is now estimated below 3x, which is satisfactory. Click here for a list of recent openings.

Signet Jewelers entered into an agreement to acquire Diamonds Direct, an off-mall jeweler focused on younger, luxury-oriented bridal shoppers, for $490 million. The all cash transaction is expected to close in 4Q22 and is projected to be immediately accretive to Signet, post-closing. Following the acquisition, Diamond Direct’s leadership team intends to invest a portion of their transaction proceeds in Signet shares.

Hudson’s Bay plans to hire more than 5,000 seasonal and permanent associates across Canada for the upcoming holiday season. The Company operates 85 locations across seven provinces.