Windsor plans to open 28 additional retail stores by the end of 2021, bringing its total count to 294. The Southern California-based young women’s apparel and accessories retailer, best known for its affordable prom dresses and special occasion outfits, expects to open approximately 35 new stores in 2022. The Company says that there has been strong demand across all of its shopping channels now that events and celebrations are returning to pre-pandemic levels. Click here for a sample list of future openings.

In other news, WBA launched Walgreens Health, a segment focused on expanding its primary care, post-acute care and home care business, including its investments in VillageMD and CareCentrix. The new segment is part of its larger strategic initiative focused on four key areas: building the pharmacy of the future to support and enable its health strategy, reimagining retail through expanded health and wellness offerings and mass personalization, accelerating private brands and digital offerings, and expanding its transformational cost-management program. The Company has a store refresh program, including adding more health and private brands, while looking to free up pharmacy capacity, reduce the cost to fill prescriptions, and also reduce inventory. The Company is building a nationwide network of micro-fulfillment sites using automation technology from iA, a company in which it made a majority investment, that will leverage its existing AmerisourceBergen distribution network. WBA expects to have 11 micro-fulfillment centers (two currently) by FYE22, servicing around 3,900 stores. The Company anticipates that by 2024, it will have 22 facilities serving more than 8,500 pharmacies, and expects to achieve a $1.10 billion working capital reduction by 2025. The Company is making an additional $5.20 billion investment in VillageMD, with plans to add care practices to 1,000 Walgreens stores by 2027 (currently 52), and agreed to acquire CareCentrix, a post-acute and home care business, for $330 million. In recent years, the Company has closed hundreds of retail stores, particularly after the acquisition of over 1,900 Rite Aid stores in 2018. There were no store closures announced as part of the latest initiative, although we speculate there could be some store rationalization going forward. Click here for a complimentary list of future openings and closings. 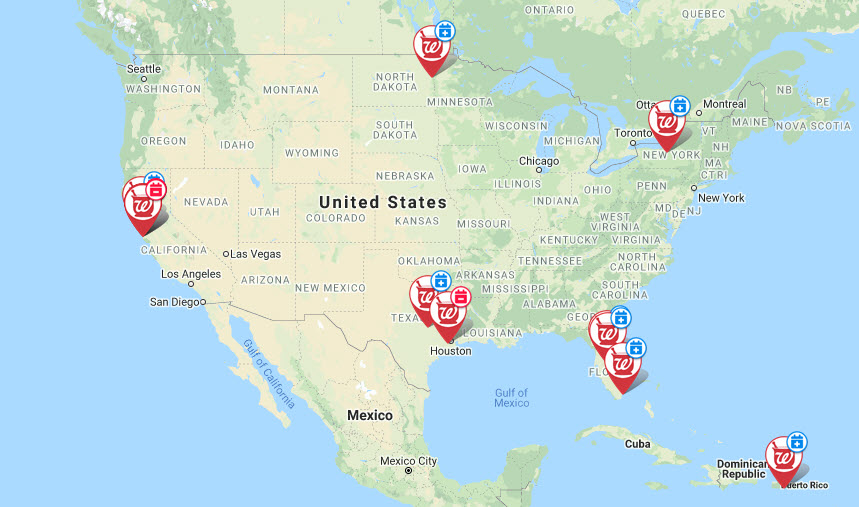 Albertsons’ 2Q sales rose 4.7% to $16.51 billion, reflecting a 1.5​​​​​​% increase in comps and higher fuel sales. Gross margin advanced 80 bps to 28.6% but was flat excluding fuel, primarily due to higher product, supply chain and advertising costs, offset by benefits related to productivity initiatives, favorable product mix and improved pharmacy margins from the administration of COVID-19 vaccines. Company-reported adjusted EBITDA was up 1.8% to $965.4 million, or 5.8% of sales, during 2Q21, primarily attributable to sales growth and partially offset by higher SG&A expenses. Two-year adjusted EBITDA grew at a 30.4% CAGR. During 1H21, the Company spent $822.5 million in capital expenditures, which included investments in digital and technology, the opening of six new stores and the completion of 76 store remodels. Click here for a complimentary list of future openings.

Wegmans has begun hiring for its first store in Washington, D.C., due to open next summer. The 84,000 square-foot supermarket will occupy space in the former Fannie Mae headquarters building in northwestern D.C. Wegmans plans to open two additional new locations in 2022, including an 81,300 square-foot store in Alexandria, VA, and a store just outside Wilmington, DE (its first Delaware store and eighth state). Click here for a list of recent and future openings. 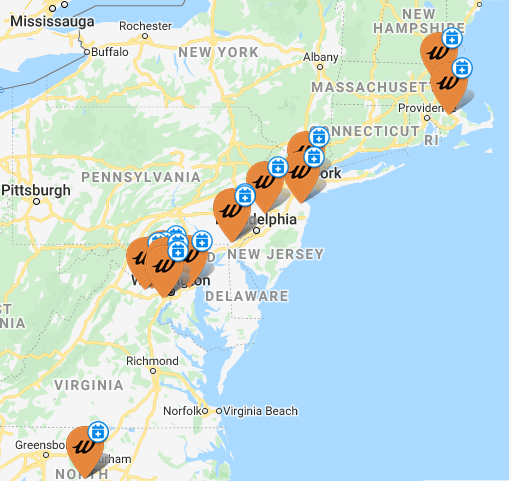 Looking ahead, Aritzia currently believes it has the inventory levels to meet or exceed its revenue targets for the rest of the year. The Company expects 3Q22 sales of C$350 million – C$375 million, an increase of 25% – 35% from 3Q21. FY22 sales are anticipated to be C$1.25 billion – C$1.30 billion, implying an increase of 45% – 50% from FY21; the Company’s previous outlook was for sales of C$1.15 billion – C$1.20 billion. Aritzia plans to open seven or eight new stores in the U.S., of which three have opened so far; four or five are expected in Miami, Las Vegas, and Nashville in the second half of the year. Another six expansions or relocations (four in Canada and two in the U.S.) are also planned, of which three have already occurred. Aritzia ended 2Q22 with 104 units, up from 97 in the prior-year period.

Barnes & Noble’s sales increased 6% YTD through August 2021 relative to the 2019 same period, despite a decrease in its store base from 628 units to 605. In addition to the higher revenue, reportedly profitability improved from 2019. The uptick in revenue follows a decade-long slide in sales and profitability coinciding with Amazon’s ascendancy. It also follows the Company being taken private by hedge fund Elliott Management in September 2019 for $683 million. Reports indicate that the private equity sponsor has contributed funding for capital requirements; it is unclear whether this implies insufficient cash flow or Elliott is providing funds for additional investment. The reports also state that Elliott may opt to exit its investment in the next two years, through either an IPO or a sale to another private purchaser.

The Company plans to open up to 12 new stores in February and March 2022, after opening eight units amid net closings during 2020 and 2021. Some of the new stores will be much smaller than the typical 26,000 square-foot locations; some of the Company’s 8,000 square-foot stores have generated volume comparable to the larger legacy stores. We note that if recent tailwinds subside, the Company may have a limited window within which to convert to the smaller format before some of the larger stores turn unprofitable. Click here for a sample list of future openings.

Target will more than double the number of Apple Inc. shop-in-shops in its stores, to 36 from 17, in time for the holidays. Target tech consultants will be trained by Apple; iPhones and other devices will be available. Among the areas getting a new Apple shop are stores in Orlando and Miami as well as nine stores in Texas. Target’s owned brand Heyday is also introducing nearly 150 new items, including ring lights and cordless headphones, priced mostly at $29.99 or less. Click here for a sample list of future openings.

7–Eleven signed a master franchise agreement with Electra Consumer Products Ltd. to develop and operate 7-Eleven stores in Israel. The expansion marks the brand’s first entry into the country and its 19th country overall. The first store is slated to open in 2022. Click here to request a list of future openings.

Ernst & Young Inc., the Court-appointed monitor in the Reitmans’ CCAA proceedings in Canada, issued a report indicating the Company is working to solidify exit financing to support: (i) a potential distribution to creditors, and (ii) working capital and capex programs. Discussions have commenced with various lenders over the past few weeks, and the Company is confident that exit financing will be secured in the next 90 days. As of September 11, the Company operated 413 stores, reflecting the permanent closing of 164 units since the date of the bankruptcy filing (May 19, 2020).

Vallarta Supermarkets opened a new store in Bakersfield, CA on October 13, bringing its total count to 53. Click here for a sample list of future openings.